The Unsupervised Distance Learning Framework (UDLF) [1] is a software developed to facilitate the general use and evaluation of novel unsupervised learning methods. These methods aim at post-processing the ranking information for different tasks, being especially useful for multimedia retrieval. The major advantage of UDLF is that it provides a unified and extensive model for implementing different unsupervised methods. Any execution or experiment can be easily conducted by setting a configuration file, no recompilation is required. To evaluate the retrieval results, the framework computes different effectiveness and efficiency measures and it allows for exporting visual output results to external files. UDLF is written in C++, works out of the box, does not require external libraries, and is compatible with different operating systems including Linux, MacOS, and Windows. The source code is publicly available on GitHub under the terms of the GPLv2 license.

Different supervised approaches have been presented with the objective of improving the effectiveness of the retrieval results. Even more recently, unsupervised learning methods have been proposed aiming at post-processing this information without the requirement of any labeled data or training information. These methods have shown promising results in the literature [2-9]. However, the authors generally do not provide the source code, which makes difficult for the users to reproduce the results.

This article is presenting the version 1.00 of the UDL Framework. Since the software is being continually maintained and improved, it is possible that some details may differ if you are using a different release of this software.

For most unsupervised learning methods an open-source implementation is not available. Moreover, methods which are publicly available do not provide a unified model for configuration and input/output files. Therefore, most users are not able to reproduce the experiments that are present in the literature. We propose UDLF which offers an open-source and multiplatform implementation of different methods for information and multimedia retrieval. The software defines a unified model, which can be easily extended with other distance learning methods. Furthermore, it provides a simple way to test different novel unsupervised distance learning approaches without demanding much effort.

The project can be compiled once and multiple experiments can be done by changing a configuration file, which specifies all of the settings and input/output files of the execution. Installation or recompilation is not necessary for most typical use cases.

UDLF follows an Object Oriented Paradigm (OOP) in C++ and is developed using the C++11 standard. Figure 1 presents a simplified model of the architecture of UDLF, in which only the most relevant classes and functions are presented. As can be seen, the classes were divided into different categories depending on their role in the project: 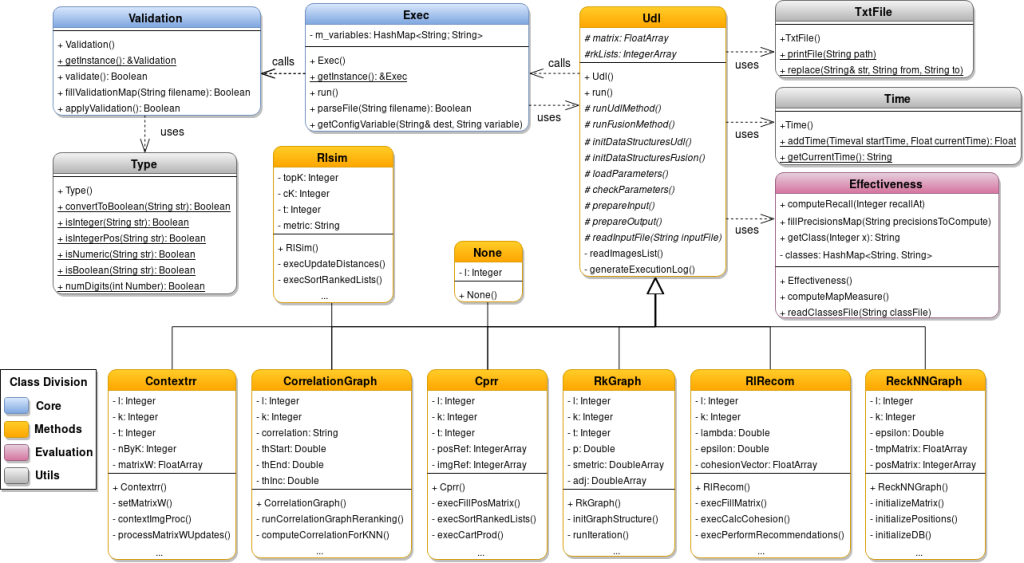 For functions and variables different prefixes are used: “+” denotes public components, “-” denotes private components, and “#” denotes components that need to be implemented by subclasses. Underlined functions (e.g. getInstance(): &ClassName) refer to static functions and classes. The use of static classes aims to facilitate the validation and read processes of the configuration file. The configuration file defines all the settings of one given execution and this is explained in further details in the next section.

The “Exec” class is responsible for starting the execution by reading the parameters in a configuration file and calling the validation process verifying the types and the possible values of the parameters. If the user has set an incorrect value, the issue is reported. The “Udl” class establishes a model for the implementation of all the unsupervised learning methods in the framework. All the methods prefixed with “#” need to be implemented by the derived classes, the details about each one of these functions are explained in more details later on. As can be noticed, different methods have different variables and different functions depending on their characteristics.

The classes “Time” and “Effectiveness” are responsible for reporting the efficiency and effectiveness measures (Precision, Recall, and MAP) of the experiments run using UDLF. For now, the “Time” class just counts the amount of time elapsed for a set of instructions. In the future, we intend to extend this class for providing statistical reports (e.g. average and standard deviation for a certain number of executions) and move it to the “Evaluation” part of UDLF.

Figure 2 illustrates all of the main steps to get started with our software. The following subsections describe in details each one of the parts of the preparations that the user should understand to perform an execution. 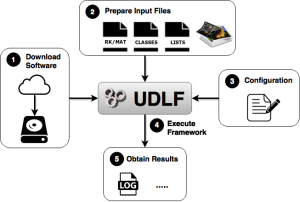 Figure 2. Basic steps to get started.

UDLF binaries as well as the source code are available in the official software page and also in the GitHub repository. The most simple way is by downloading the executable for your operating system to be executed in the user’s terminal. However, if the executable for the operating system in use is not available, users can download the source code and compile it using the supplied Makefile. We recommend the GitHub repository for users that want to check for pre-releases.

For running experiments and evaluations with UDLF there are mandatory and optional files. The mandatory files include:

The optional files are

For a better understanding of the rankings, Figure 5 presents an example of ranked lists file where the images are identified with their filenames. The dataset objects can also be identified by numbers (an object number is the line that it appears in the lists file) as shown in Figure 6. Besides the representation, Figures 5 and 6 represent exactly the same content. The type of representation to be used is specified once again by the configuration file, which is further explained in the next step. 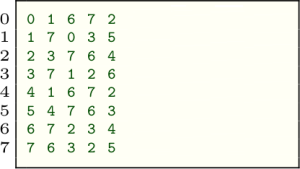 For your first use, we highly recommend the dataset files that are available in the source repository. In case of any remaining doubt, more details about the file formats can be consulted in the GitHub sofware wiki.

Each experiment run with UDLF is defined by a configuration file: the desired task, method being used, dataset information, input/output files, evaluation settings, and other details. To specify the values of the parameters, a key-value syntax is used: “PARAMETER = VALUE”. Line comments are supported using “#”. Figure 7 presents an example of configuration where the path of the files and the necessary parameters are set. Each line follows the structure: “PARAMETER = VALUE #(regular expression): explanation about the parameter”. Regarding the regular expressions, some simplifications were used: “TUint” stands for unsigned integer, “TFloat” stands for real numbers, and “TBool” stands for boolean values (true or false). Notice that the parameters and values are both case sensitive. 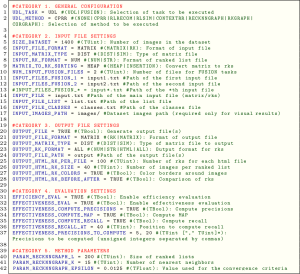 A complete example of configuration file can be found in the GitHub repository.

Since no installation is required, this step is really simple. An experiment can be done by calling the executable in your terminal: “./udlf [path_of_configuration_file]”. If no file is specified, the program searches for a file called “config.ini” in the directory of the executable.

In case of any issue with the parameters or the configuration, the program will attempt to use the default values for the parameters and proceed with the execution. However, if an important parameter is not specified and it can’t be inferred, the execution is aborted. Figure 8 shows a simple and short example that illustrates this process.

Figure 8. Example of how the framework reports issues in the configuration file.

5. Obtaining and analysing the results

The results are reported in the end of the execution and are also stored in a “log.txt” file as illustrated in Figure 9. As can be seen, it summarizes the most important parameters and their values, also including the date of the execution. The amount and type of results provided will depend on what was specified in the configuration file. 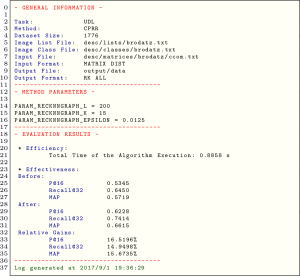 There are seven different unsupervised learning methods currently implemented. Some of them has results compared with the state-of-the-art. Below there is a brief description of each one of the implemented methods:

Development of Other Methods

New methods can be easily implemented and integrated into UDLF. As it was presented earlier, all methods must inherit from the “Udl” class. It is also necessary to extend the internal configuration files with the parameters of the new method. Aiming to facilitate the process of implementing new methods in the framework, a python script is provided. Given a file with the parameters of the new method, it creates all the necessary files and make all the fundamental changes in the software. Following the script execution, the new method can be implemented in the files “src/MyMethod.cpp” and “src/MyMethod.cpp” created by the script. There are several functions that need to be extended:

UDLF is an open-source and multiplatform framework of unsupervised learning methods for multimedia retrieval and offers a unified model to run different distance learning methods on arbitrary data. Due to its open source nature and modular architecture UDLF can easily be extended and new methods can be added. A broad range of different experiments can be conducted just by modifying or creating a new configuration file, no recompilation is required.

In the future UDLF will support multi-threading and parallel execution of the available distance learning methods. Moreover, we are working on improving the usability of UDLF. We intend to provide a visual interface moving away from terminal input and we aim to provide conversion routines for common data formats compatible with UDLF. Besides that we are continuously maintaining and updating the code base and plan to provide new algorithms and implementing novel ideas, including methods from other research groups. We hope that many give UDLF a try and help us improving it by offering suggestions, ideas and any other form of feedback.