The 83rd JPEG meeting was held in Geneva, Switzerland.

The meeting was very dense due to the multiple activities taking place. Beyond the multiple standardization activities, like the new JPEG XL, JPEG Pleno, JPEG XS, HTJ2K or JPEG Systems, the 83rd JPEG meeting had the report and discussion of a new exploration study on the use of learning based methods applied to image coding, and two successful workshops, namely on digital holography applications and systems and the 3rd on media blockchain technology.

The new exploration study on the use of learning based methods applied to image coding was initiated at the previous 82nd JPEG meeting in Lisbon, Portugal. The initial approach provided very promising results and might establish a new alternative for future image representations.

The workshop on digital holography applications and systems, revealed the state of the art on industry applications and current technical solutions. It covered applications such as holographic microscopy, tomography, printing and display. Moreover, insights were provided on state-of-the-art holographic coding technologies and quality assessment procedures. The workshop allowed a very fruitful exchange of ideas between the different invited parties and JPEG experts.

The 3rd workshop of a series organized around media blockchain technology, had several talks were academia and industry shared their views on this emerging solution. The workshop ended with a panel where multiple questions were further elaborated by different panelists, providing the ground to a better understanding of the possible role of blockchain in media technology for the near future.

Two new logos for JPEG Pleno and JPEG XL, were approved and released during the Geneva meeting.

The two new logos, for JPEG Pleno and JPEG XL

The 83rd JPEG meeting had the following highlights: 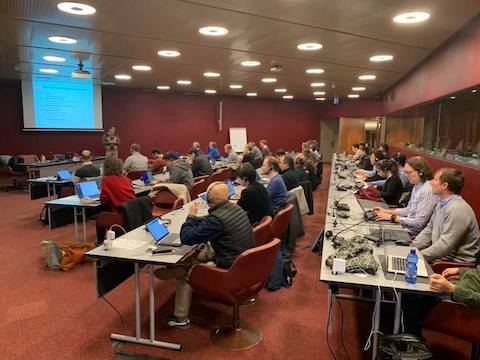 In the following a short summary of the most relevant achievements of the 83rd meeting in Geneva, Switzerland, are presented.

The JPEG Committee is pleased to announce that it has started exploration studies on the use of learning-based solutions for its standards.

In the last few years, several efficient learning-based image coding solutions have been proposed, mainly with improved neural network models. These advances exploit the availability of large image datasets and special hardware, such as the highly parallelizable graphic processing units (GPUs). Recognizing that this area has received many contributions recently and it is considered critical for the future of a rich multimedia ecosystem, JPEG has created the JPEG AI AhG group to study promising learning-based image codecs with a precise and well-defined quality evaluation methodology.

In this meeting, a taxonomy was proposed and available solutions from the literature were organized into different dimensions. Besides, a list of promising learning-based image compression implementations and potential datasets to be used in the future were gathered.

Software for the JPEG XL verification model has been implemented. A series of experiments showed promising results for lossy, lossless and progressive coding. In particular, photos can be stored with significant savings in size compared to equivalent-quality JPEG files. Additionally, existing JPEG files can also be considerably reduced in size (for faster download) while retaining the ability to later reproduce the exact JPEG file. Moreover, lossless storage of images is possible with major savings in size compared to PNG. Further refinements to the software and experiments (including enhancement of existing JPEG files, and animations) will follow.

The JPEG Committee has three activities in JPEG Pleno: Light Field, Point Cloud, and Holographic image coding. A generic box-based syntax has been defined that allows for signaling of these modalities, independently or composing a plenoptic scene represented by different modalities. The JPEG Pleno system also includes a reference grid system that supports the positioning of the respective modalities. The generic file format and reference grid system are defined in Part 1 of the standard, which is currently under development. Part 2 of the standard covers light field coding and supports two encoding mechanisms. The launch of specifications for point cloud and holographic content is under study by the JPEG committee.

The JPEG committee is pleased to announce the creation of an Amendment to JPEG XS Core Coding System defining the use of the codec for raw image sensor data. The JPEG XS project aims at the standardization of a visually lossless low-latency and lightweight compression scheme that can be used as a mezzanine codec in various markets. Among the targeted use cases for raw image sensor compression, one can cite video transport over professional video links (SDI, IP, Ethernet), real-time video storage in and outside of cameras, memory buffers, machine vision systems, and data compression onboard of autonomous cars. One of the most important benefit of the JPEG XS codec is an end-to-end latency ranging from less than one line to a few lines of the image.

The JPEG committee is pleased to announce a significant milestone, with ISO/IEC 15444-15 High-Throughput JPEG 2000 (HTJ2K) submitted to ISO for immediate publication as International Standard. HTJ2K opens the door to higher encoding and decoding throughput for applications where JPEG 2000 is used today.

In order to clearly identify the impact of blockchain and distributed ledger technologies on JPEG standards, the committee has organized several workshops to interact with stakeholders in the domain. The programs and proceedings of these workshop are accessible on the JPEG website:

A 4th workshop is planned during the 84th JPEG meeting to be held in Brussels, Belgium on July 16th, 2019. The JPEG Committee invites experts to participate to this upcoming workshop.

At the 83rd meeting, JPEG Systems realized significant progress towards improving users’ privacy with the DIS text completion of ISO/IEC 19566-4 “Privacy, Security, and IPR Features” which will be released for ballot. JPEG Systems continued to progress on image search and retrieval with the FDIS text release of JPSearch ISO/IEC 24800 Part 2- 2nd edition. Finally, support for JPEG 2000, JPEG XR, and JPEG XS images encapsulated in ISO/IEC 15444-12 are progressing towards IS stage; this enables these JPEG images to be encapsulated in ISO base media file formats, such as ISO/IEC 23008-12 High efficiency file format (HEIF).

“Intelligent codecs might redesign the future of media compression. JPEG can accelerate this trend by producing the first AI based image coding standard.” said Prof. Touradj Ebrahimi, the Convenor of the JPEG Committee.

The JPEG Committee nominally meets four times a year, in different world locations. The 82nd JPEG Meeting was held on 19-25 January 2018, in Lisbon, Portugal. The next 84th JPEG Meeting will be held on 13-19 July 2019, in Brussels, Belgium.

More information about JPEG and its work is available at jpeg.org or by contacting Antonio Pinheiro or Frederik Temmermans of the JPEG Communication Subgroup.