The 81st JPEG meeting was held in Vancouver, British Columbia, Canada, at which significant efforts were put into the analysis of the responses to the call for proposals on the next generation image coding standard, nicknamed JPEG XL, that is expected to provide a solution for image format with improved quality and flexibility, allied with a better compression efficiency. The responses to the call confirms the interest of different parties on this activity. Moreover, the initial  subjective and objective evaluation of the different proposals confirm a significative evolution on both quality and compression efficiency that will be provided by the future standard.

Apart the multiple activities related with several standards development, a workshop on Blockchain technologies was held at Telus facilities in Vancouver, with several talks on Blockchain and Distributed Ledger Technologies, and a Panel where the influence of these technologies on multimedia was analysed and discussed. A new workshop is planned at the 82nd JPEG meeting to be held in Lisbon, Portugal, in January 2019.

The 81st JPEG meeting had the following highlights: 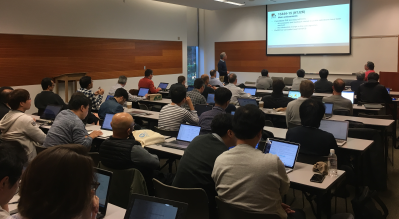 The JPEG Committee launched the Next Generation Image Coding activity, also referred to as JPEG XL, with the aim of developing a standard for image coding that offers substantially better compression efficiency than existing image formats, along with features desirable for web distribution and efficient compression of high quality images. A Call for Proposals on Next Generation Image Coding was issued at the 79th JPEG meeting.

Seven submissions were received in response to the Call for Proposals. The submissions, along with the anchors, were evaluated in subjective tests by three independent research labs. At the 81st JPEG meeting in Vancouver, Canada, the proposals were evaluated using subjective and objective evaluation metrics, and a verification model (XLM) was agreed upon. Following this selection process, a series of experiments have been designed in order to compare the performance of the current XLM with alternative choices as coding components including those technologies submitted by some of the top performing submissions; these experiments are commonly referred to as core experiments and will serve to further refine and improve the XLM towards the final standard.

On October 16th, 2018, JPEG organized its first workshop on Media Blockchain in Vancouver. Touradj Ebrahimi JPEG Convenor and Frederik Temmermans a leading JPEG expert, presented on the background of the JPEG standardization committee and ongoing JPEG activities such as JPEG Privacy and Security. Thereafter, Eric Paquet, Victoria Lemieux and Stephen Swift shared their experiences related to blockchain technology focusing on standardization challenges and formalization, real world adoption in media use cases and the state of the art related to consensus models. The workshop closed with an interactive discussion between the speakers and the audience, moderated by JPEG Requirements Chair Fernando Pereira.

The presentations from the workshop are available for download on the JPEG website. In January 2019, during the 82nd JPEG meeting in Lisbon, Portugal, a 2nd workshop will be organized to continue the discussion and interact with European stakeholders. More information about the program and registration will be made available on jpeg.org.

In addition to the workshop, JPEG issued an updated version of its white paper “JPEG White paper: Towards a Standardized Framework for Media Blockchain and Distributed Ledger Technologies” that elaborates on the blockchain initiative, exploring relevant standardization activities, industrial needs and use cases. The white paper will be further extended in the future with more elaborated use cases and conclusions drawn from the workshops. To keep informed and get involved in the discussion, interested parties are invited to register to the ad hoc group’s mailing list via http://jpeg-blockchain-list.jpeg.org.

Touradj Ebrahimi, convenor of JPEG, giving the introductory talk in the Workshop on Blockchain technology.

The JPEG committee is pleased to announce a significant milestone of the JPEG XS project, with the Core Coding System (aka JPEG XS Part-1) submitted to ISO for immediate publication as International Standard. This project aims at the standardization of a near-lossless low-latency and lightweight compression scheme that can be used as a mezzanine codec within any AV market. Among the targeted use cases are video transport over professional video links (SDI, IP, Ethernet), real-time video storage, memory buffers, omnidirectional video capture and rendering, and sensor compression (for example in cameras and in the automotive industry). The Core Coding System allows for visual transparent quality at moderate compression rates, scalable end-to-end latency ranging from less than a line to a few lines of the image, and low complexity real time implementations in ASIC, FPGA, CPU and GPU. Beside the Core Coding System, Profiles and levels (addressing specific application fields and use cases), together with the transport and container formats (defining different means to store and transport JPEG XS codestreams in files, over IP networks or SDI infrastructures) are also being finalized and their expected submission for publication as International Standard is Q1 2019.

The JPEG Committee has reached a major milestone in the development of an alternative block coding algorithm for the JPEG 2000 family of standards, with ISO/IEC 15444-15 High Throughput JPEG 2000 (HTJ2K) achieving Draft International Status (DIS).

The JPEG Committee has begun the development of HTJ2K conformance codestreams and reference software.

At the Vancouver meeting, a generic file format syntax architecture was outlined that allows for efficient exchange of these modalities by utilizing a box-based file format. This format will enable the carriage of light field, point cloud and holography data, including associated metadata for colour space specification, camera calibration etc. In the particular case of light field data, this will encompass both texture and disparity information.

For coding of point clouds and holographic data, activities are still in exploratory phase addressing the elaboration of use cases and the refinement of requirements for coding such modalities. In addition, experimental procedures are being designed to facilitate the quality evaluation and testing of technologies that will be submitted in later calls for coding technologies. Interested parties active in point cloud and holography related markets and applications, both from industry and academia are welcome to participate in this standardization activity.

The JPEG Committee nominally meets four times a year, in different world locations. The 81st JPEG Meeting was held on 12-19 October 2018, in Vancouver, Canada. The next 82nd JPEG Meeting will be held on 19-25 January 2019, in Lisbon, Portugal.

More information about JPEG and its work is available at www.jpeg.org or by contacting Antonio Pinheiro or Frederik Temmermans (pr@jpeg.org) of the JPEG Communication Subgroup.