Over the last decade, audio analysis has become a field of active research in academic and engineering worlds. It refers to the extraction of information and meaning from audio signals for analysis, classification, storage, retrieval, and synthesis, among other tasks. Related research topics challange understanding and modeling of sound and music, and develop methods and technologies that can be used to process audio in order to extract acoustically and musically relevant data and make use of this information. Audio analysis techniques are instrumental in the development of new audio-related products and services, because these techniques allow novel ways of interaction with sound and music.

Essentia is an open-source C++ library for audio analysis and audio-based music information retrieval released under the Affero GPLv3 license (also available under proprietary license upon request). It contains an extensive collection of reusable algorithms which implement audio input/output functionality, standard digital signal processing blocks, statistical characterization of data, and a large set of spectral, temporal, tonal and high-level music descriptors that can be computed from audio. In addition, Essentia can be complemented with Gaia, a C++ library with python bindings which allows searching in a descriptor space using different similarity measures and classifying the results of audio analysis (same license terms apply). Gaia can be used to generate classification models that Essentia can use to compute high-level description of music. Essentia is not a framework, but rather a collection of algorithms wrapped in a library. It doesn’t enforce common high-level logic for descriptor computation (so you aren’t locked into a certain way of doing things). It rather focuses on the robustness, performance and optimality of the provided algorithms, as well as ease of use. The flow of the analysis is decided and implemented by the user, while Essentia is taking care of the implementation details of the algorithms being used. A number of examples are provided with the library, however they should not be considered as the only correct way of doing things. The library includes Python bindings as well as a number of predefined executable extractors for the available music descriptors, which facilitates its use for fast prototyping and allows setting up research experiments very rapidly. The extractors cover a number of common use-cases for researchers, for example, computing all available music descriptors for an audio track, extracting only spectral, rhythmic, or tonal descriptors, computing predominant melody and beat positions, and returning the results in yaml/json data formats. Furthermore, it includes a Vamp plugin to be used for visualization of music descriptors using hosts such as Sonic Visualiser. The library is cross-platform and supports Linux, Mac OS X and Windows systems. Essentia is designed with a focus on the robustness of the provided music descriptors and is optimized in terms of the computational cost of the algorithms. The provided functionality, specifically the music descriptors included out-of-the-box and signal processing algorithms, is easily expandable and allows for both research experiments and development of large-scale industrial applications. Essentia has been in development for more than 7 years incorporating the work of more than 20 researchers and developers through its history. The 2.0 version marked the first release to be publicly available as free software released under AGPLv3.

Essentia currently features the following algorithms (among others):

The complete list of algorithms is available online in the official documentation.

The main purpose of Essentia is to serve as a library of signal-processing blocks. As such, it is intended to provide as many algorithms as possible, while trying to be as little intrusive as possible. Each processing block is called an Algorithm, and it has three different types of attributes: inputs, outputs and parameters. Algorithms can be combined into more complex ones, which are also instances of the base Algorithm class and behave in the same way. An example of such a composite algorithm is presented in the figure below. It shows a composite tonal key/scale extractor, which combines the algorithms for frame cutting, windowing, spectrum computation, spectral peaks detection, chroma features (HPCP) computation and finally the algorithm for key/scale estimation from the HPCP (itself a composite algorithm).

The algorithms can be used in two different modes: standard and streaming. The standard mode is imperative while the streaming mode is declarative. The standard mode requires to specifying the inputs and outputs for each algorithm and calling their processing function explicitly. If the user wants to run a network of connected algorithms, he/she will need to manually run each algorithm. The advantage of this mode is that it allows very rapid prototyping (especially when the python bindings are coupled with a scientific environment in python, such as ipython, numpy, and matplotlib).

The streaming mode, on the other hand, allows to define a network of connected algorithms, and then an internal scheduler takes care of passing data between the algorithms inputs and outputs and calling the algorithms in the appropriate order. The scheduler available in Essentia is optimized for analysis tasks, and does not take into account the latency of the network. For real-time applications, one could easily replace this scheduler with another one that favors latency over throughput. The advantage of this mode is that it results in simpler and safer code (as the user only needs to create algorithms and connect them, there is no room for him to make mistakes in the execution order of the algorithms), and in lower memory consumption in general, as the data is streamed through the network instead of being loaded entirely in memory (which is the usual case when working with the standard mode). Even though most of the algorithms are available for both the standard and streaming mode, the code that implements them is not duplicated as either the streaming version of an algorithm is deduced/wrapped from its standard implementation, or vice versa.

Essentia has served in a large number of research activities conducted at Music Technology Group since 2006. It has been used for music classification, semantic autotagging, music similarity and recommendation, visualization and interaction with music, sound indexing, musical instruments detection, cover detection, beat detection, and acoustic analysis of stimuli for neuroimaging studies. Essentia and Gaia have been used extensively in a number of research projects and industrial applications. As an example, both libraries are employed for large-scale indexing and content-based search of sound recordings within Freesound, a popular repository of Creative Commons licensed audio samples. In particular, Freesound uses audio based similarity to recommend sounds similar to user queries. Dunya is a web-based software application using Essentia that lets users interact with an audio music collection through the use of musical concepts that are derived from a specific musical culture, in this case Carnatic music. 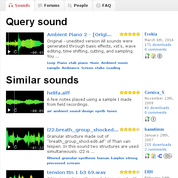 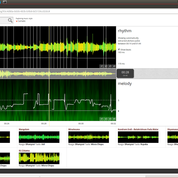 Essentia can be easily used via its python bindings. Below is a quick illustration of Essentia’s possibilities for example on detecting beat positions of music track and its predominant melody in a few lines of python code using the standard mode: 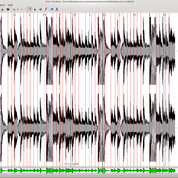 An interested reader is referred to the documention online for more example applications built on top of Essentia.

The detailed information about Essentia is available online on the official web page: http://essentia.upf.edu. It contains the complete documentation for the project, compilation instructions for Debian/Ubuntu, Mac OS X and Windows, as well as precompiled packages. The source code is available at the official Github repository: http://github.com/MTG/essentia. In our current work we are focused on expanding the library and the community of users, and all active Essentia users are encouraged to contribute to the library.