Christian Timmerer is a researcher, entrepreneur, and teacher on immersive multimedia communication, streaming, adaptation, and Quality of Experience. He is an Assistant Professor at Alpen-Adria-Universität Klagenfurt, Austria. Follow him on Twitter at http://twitter.com/timse7 and subscribe to his blog at http://blog.timmerer.com. 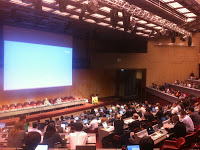 The 103rd MPEG meeting was held in Geneva, Switzerland, January 21-15, 2013. The official press release can be found here (doc only) and I’d like to introduce the new MPEG-H standard (ISO/IEC 23008) referred to as high efficiency coding and media delivery in heterogeneous environments:

The MMT project was started in order to address the needs of modern media transport applications going beyond the capabilities offered by existing means of transportation such as formats defined by MPEG-2 transport stream (M2TS) or ISO base media file format (ISOBMFF) group of standards. The committee draft was approved during the 101st MPEG meeting. As a response to the CD ballot, MPEG received more than 200 comments from national bodies and, thus, decided to issue the 2nd committee draft which will be publicly available by February 7, 2013.

HEVC is the next generation video coding standard jointly developed by ISO/IEC JTC1/SC29/WG11 (MPEG) and the Video Coding Experts Group (VCEG) of ITU-T WP 3/16. Please note that both ITU-T and ISO/IEC MPEG use the term “high efficiency video coding” in the the title of the standard but one can expect – as with its predecessor – that the former will use ITU-T H.265 and the latter will use MPEG-H HEVC for promoting its standards. If you don’t want to participate in this debate, simply use high efficiency video coding.

The MPEG press release says that the “HEVC standard reduces by half the bit rate needed to deliver high-quality video for a broad variety of applications” (note: compared to its predecessor AVC). The editing period for the FDIS goes until March 3, 2013 and then with the final preparations and a 2 month balloting period (yes|no vote only) once can expect the International Standard (IS) to be available early summer 2013. Please note that there are no technical differences between FDIS and IS.

The ITU-T press release describes HEVC as a standard that “will provide a flexible, reliable and robust solution, future-proofed to support the next decade of video. The new standard is designed to take account of advancing screen resolutions and is expected to be phased in as high-end products and services outgrow the limits of current network and display technology.”

The 3D audio standard shall complement MMT and HEVC assuming that in a “home theater” system a large number of loudspeakers will be deployed. Therefore, MPEG has issued a Call for Proposals (CfP) with the selection of the reference model v0 due in July 2013. The CfP says that MPEG-H 3D Audio “might be surrounding the user and be situated at high, mid and low vertical positions relative to the user’s ears. The desired sense of audio envelopment includes both immersive 3D audio, in the sense of being able to virtualize sound sources at any position in space, and accurate audio localization, in terms of both direction and distance.”

“In addition to a “home theater” audio-visual system, there may be a “personal” system having a tablet-sized visual display with speakers built into the device, e.g. around the perimeter of the display. Alternatively, the personal device may be a hand-held smart phone. Headphones with appropriate spatialization would also be a means to deliver an immersive audio experience for all systems.”

The following documents shall be come available at http://mpeg.chiariglione.org/ (note: some may have an editing period – YY/MM/DD). If you have difficulties to access one of these documents, please feel free to contact me.